THE MINIATURES OF UDVARDY BOGI 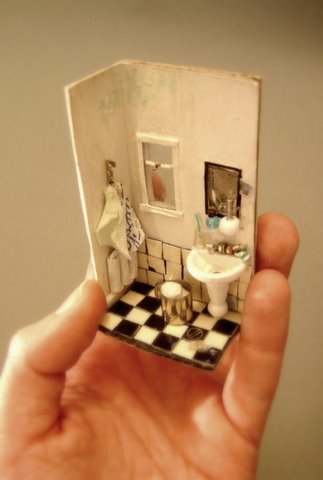 Udvardy Bogi is a Hungarian artist, living in Budapest who makes miniature rooms and other hand sized artworks. In the rooms are objects of everyday use, a chair, a pillow, a book, a stool. But within these miniatures are stories with the unmistakable marks of a careful hand using flights of fantasy and imaginative worlds both private and revealing. She uses the miniature format to concentrate these places into hand held wonders. The following images are from her collection. 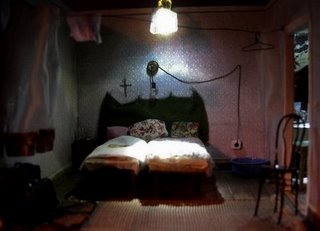 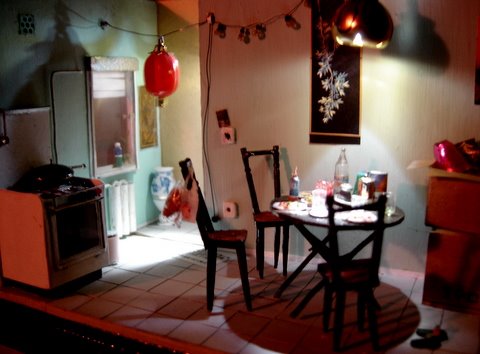 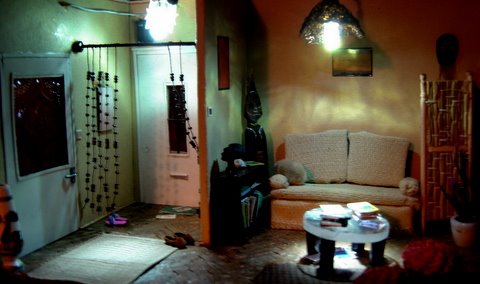 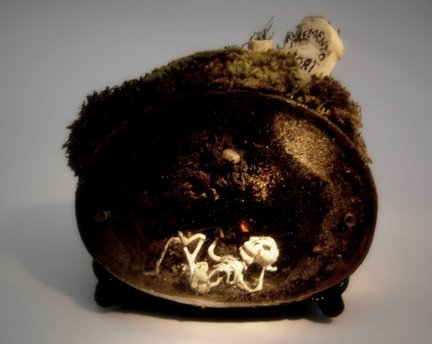 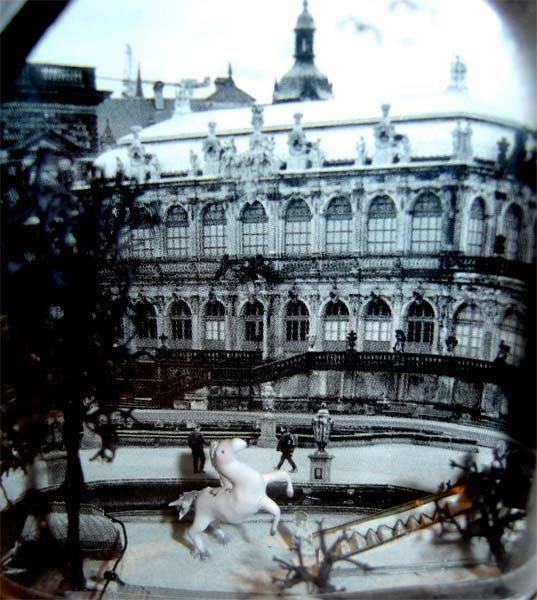 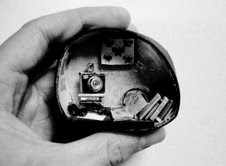 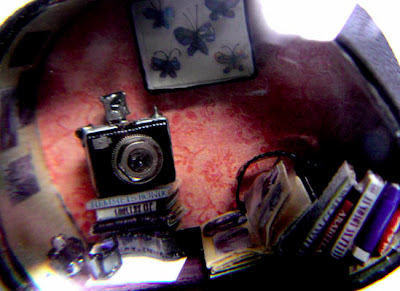 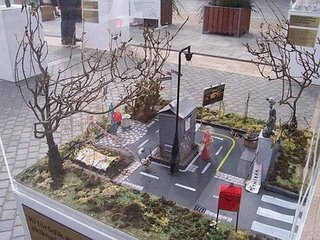 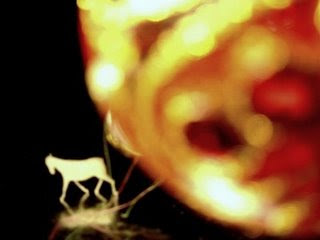 An internet-interview with Udvardy Bogi…

GEO – Your works are wonderful. The miniature room series is especially intriguing. Tell me about what started you making the maquette series of rooms.

BOGI - It began from the Secondary School of Fine and Applied Art. When I was 18, I never wanted to go to any house-parties or drinking with the others. Maybe it was the depression, I do not know exactly. I was always alone in my room puttering with something. One year later, I started making the small interiors and they began to be my real world. At the time I was reading the books of Agatha Christie and from many other writers. I love the classical English style. “The Little Library”,”The Old Wall” and the detective-novels. The 1920 to the 1930 periods inspire me.

Later, when I traveled to Rome (Clock menus), to Paris (French bathroom) and to Prague, all of these countries inspired me with something…the lifestyle, the fashion, the history, the people’s behavior and their culture. Later I started to make some miniatures and maquettes. (Memento mori, Clocks, Sunday play, Poppyhouse Maison). These rooms were are not just simple models but are situations, attitudes and dreams. They may seem a little bit strange or morbid but I like the beautiful "pink rose" effect with a little black humor.

GEO - Are these actual rooms or are they imaginary rooms? The rooms have a haunting quality to them as if they are both very familiar and, at the same time, like peeking into someone else's life. How do you view the topics of privacy, interior life, the reduction of a person's things to objects that surround a sitting chair?

BOGI - All of my rooms are always imaginary, not actual. I think its a more interesting challenge to make something from a fantasy and not to copy from the real or actual. For example, I have made three rooms in the last year. The theme I chose was of foreign internationals living in Budapest. One of African, another was a Transylvanian and the third a Chinese living in Budapest. I wanted to introduce three typical rooms of three nations. I wanted to change some objects from my fantasy so I put some imaginary objects into the small room to demonstrate my personal idea of a life style from these three countries. They are imaginary interiors of what people have brought with themselves from their cultural homeland and to remind them of their own country.

GEO - Where have you shown your works?

GEO - How does photography fit in with your works? Some of the miniatures look like they were specifically arranged and lit for the camera. Do you think about the works being for the photo or the photograph being a vital part of the process?


BOGI – At the present time, the photos about my works are simple documentation. I don’t have any purpose or aim with the photography because it is enough to work and build the mini worlds. But I think the art of the maquette can go a long way with potentiality. I feel like I am only near the starting line with what may be possible in the creation of these interiors. Later, I see the possibilities of photography and start thinking about the interrelation between the photo and the maquette. The interface between the large and small is a new problem in the art and deserves some further explorations.

GEO – Talk a little about your 'Clock Menus' and the 'Snow Globes'. What is going on in these works?

BOGI - I spent two years with many trips and journeys abroad. During the travels I had an impression of airports with the convergence of many people, the differences between the nations and the business life that flows through the terminals. This work shows four slices of the nations and how I see the USA, London, Milan and Tokyo. The little snow globes were an experiment to make the a series without a Santa Claus in them.

GEO - The 'Vodafone' street landscape in an exhibition case on the street…. Describe what this piece is about.

BOGI - The international telecommunication company, Vodafone has a foundation. This company has a program that supports disabled people like the blind, deaf and handicapped. My work demonstrated the street lifestyle of the homeless people. In the mini landscape I show a park with plants and trees, where the homeless people live. But the park was like a room. In the room was a park bench, like a sofa in a home. There were small pigeons as pets like parrots or canaries in a cage and the street light like a desk lamp. It shows they live in their own room, only it is outside the home but still has the same furniture.

GEO - And how about the subject of humor in your works. Some of the works have an infectious joy to them while others could be a little scary For example what’s the story behind 'Memento Mori” and about the small skeleton underground smelling the rose.

BOGI - Memento mori (remember the mortal) means to spend your life in good things without any sins. This was the basic idea. I like the black humor, I like Tim Burton’s morbid world, and the Memento Mori is a gift to my friend, Istvan Bodoczky, a kite artist, who recently had an operation at a clinic. The message is everybody should live a good life, without any bad thoughts or evil deeds.

GEO - How many hours do you spend on a typical maquette?

BOGI - I spend sometimes four to twenty hours on one piece. It totally depends on the size and the detail.

GEO - What sort of subjects inspire you to make your miniature artworks?

BOGI - Everything inspires me, from the everyday situations or impressions of the world to one little fleck of glass or plastic that I find. From one little piece junk metal, for instance, I can build a little world around that piece or, on the other hand, I dream up a complete situation and I look for the small objects for it. I use things I find like refuse and trash. I never buy, for example, a complete set of finished goods or a ready made little chair or dish or other things your would find in shops. I construct everything from things most people throw away.

GEO - Talk about what your next project will be? I know you're already thinking about it.

BOGI - I want to work with glass. I use the eye-glass lenses for miniature rooms. I want to see how can I demonstrate the narrow field of view that eye glasses are about. I like to think about the concentrated vision of The Butterfly Collector or the eye put to the photographer’s lens. Other stories in the lenses include; the English chocolate dessert with a little glass of poison, the telephone chat about love with a white pigeon, the old sailor with his pack of cigarettes, the fast breakfast of a businessman and so on. I want to do some maquettes that imitate nature, the weather, the air, the seasons... 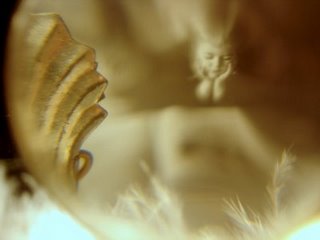 
More works can be seen on his blog site at

http://bogiudvardy.blogspot.com/
or see these photos and more on the slide show